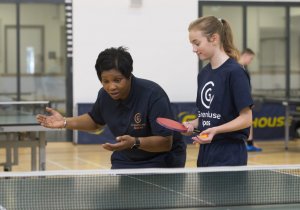 Greenhouse Sports' intensive schools-based sports programmes achieve positive behavioural change, reduce absenteeism and raise academic performance for pupils in some of London's most deprived areas. These are the key findings of a new study, published today by researchers at Loughborough University. It has been independently reviewed by volunteering charity Pro Bono Economics and is supported by NHS England.

The scoping study examined data on the attendance, behaviour and academic attainment of over 700 participating pupils at four inner-city London schools where the Greenhouse Sports model has been well established for over three years. This data, which duly included control groups (pupils who had not engaged with Greenhouse Sports programmes) was combined with the findings of 20 qualitative interviews, which gathered the views of head teachers, heads of PE, Greenhouse Sports' full-time coaches and participating pupils and assessed whether participating pupils were gaining the Social, Thinking, Emotional and Physical (STEP) skills to improve their life chances: resilience, team-building, persistence and time management. Overall, the research was designed with the aim of impartially examining the impact of Greenhouse Sports' programmes on individual participants and on the four schools' wider culture.

The pupils enrolled in Greenhouse Sports programmes often had histories of poor attendance and academic attainment and in some instances were on the cusp of being excluded. The researchers at Loughborough University's School of Sport, Exercise and Health Sciences found that, when compared to the London average, pupils on the Greenhouse Sports programmes are twice more likely to meet or exceed the 60 minutes of exercise a day recommended by Government. On average 36% of Greenhouse Sports pupils do 60 minutes of exercise a day, compared to just 16% of young people living in London who meet these recommended hours of physical activity.

The researchers also found a very strong link between participants' increased school attendance and a rise in academic attainment. The research thus suggests that Greenhouse Sports' model of embedding full-time sports coaches into schools can improve the life chances of young people.

Participating pupils became strongly motivated by Greenhouse Sports' programmes, which are delivered by highly-trained full-time sports coaches who also act as personal mentors. As a consequence, the participating pupils attended between 3.5 days and 10 more days of school a year than their peers in control groups. In one school, pupils who regularly participated in Greenhouse Sports' programmes, which are mainly delivered outside the school curriculum, consistently attended, on average, a week's more school per year than their non-Greenhouse peers. In another school, the programme consistently raised academic attainment, with Greenhouse Sports pupils outperforming their peers by a third of a grade in English and 40% of a grade in Maths.

Greenhouse Sports is a London-based charity which partners on sports programmes with schools, often in deprived areas. The programmes are often delivered against a backdrop of rising obesity levels, high absenteeism (which the DfE has linked to low academic achievement) and rising levels of mental ill health amongst young people. The charity embeds highly-qualified sports coach-mentors into schools on a full-time basis, so that students, benefiting from consistent personal support, are motivated to become more physically active and learn life skills. Its programmes cover a wide range of sports, including basketball, tennis and table tennis.

By analysing both quantitative and qualitative data on the four participating schools, the researchers at Loughborough University also found that, beyond its positive effect on the young people directly engaged in the programme – improving their school attendance and educational attainment, and positively impacting on their mental wellbeing – the Greenhouse Sports programme also benefited the school culture as participants became role models for their peers.

We believe working in partnerships with schools is the best way to engage young people with this type of sports intervention. A full-time Greenhouse Sports coach and mentor helps to create a safe, fun and challenging environment that enables young people to achieve their potential. We asked ourselves some challenging questions in this research by Loughborough University which was also externally reviewed by volunteering charity Pro Bono Economics. It provides unequivocal evidence of the positive impact of intensive sports coaching and mentoring on the lives of young people, and also supports our view that further high quality research is needed to continue to inform policy in this area.

Robustly demonstrating the impact of sports-based intervention programmes on young people is extremely difficult. The scoping study enabled us to trial an approach in a small number of schools engaged with Greenhouse Sports. Despite initial scepticism about what it would be possible to demonstrate using pre-existing school data, the analysis revealed widespread evidence that meaningful engagement in the Greenhouse Sports programmes was associated with a range of positive outcomes for students when compared to students who did not participate. We are looking forward to the next stage of the research, which will examine whether these findings are replicated in a larger sample of schools.

We were delighted to quality-assure this excellent report by engaging one of our volunteer economists. Our assistance to charities is unbiased and robust, and our work for Greenhouse Sports confirms that its intervention in schools really does make a difference to attainment, attendance and behaviour. I have personally worked with Greenhouse for some years now, and am pleased to see that economic evidence produced by Loughborough University and our volunteers can back up the charity's impact narrative.

It is exciting to see this small scale study, part funded by NHS England, show students' academic success and personal wellbeing significantly improved by sport and exercise. This innovative programme has great potential for positive behavioural change for pupils in some of London's most deprived areas, as well as clear benefits to their physical and mental health. There are many things to celebrate in the health and wellbeing of children and young people now, but we cannot afford to be complacent and as this study shows there is more we can do to improve our children's health and life chances and help them transition to a safe and fulfilling young adult life while realising their full potential.

The small-scale study will be followed up with further research in the coming year.

For a copy of the report, case study requests, or further information please contact:

This small-scale scoping study was conducted by faculty from Loughborough University's award-winning School of Sport, Exercise and Health Sciences between March and September 2017. Its aims were to:

In each of the four inner-city London schools chosen for the study, the Greenhouse Sports model has been well established for over three years. Therefore, this study cannot be interpreted as providing evidence that all Greenhouse Sports' intensive schools-based sports programmes achieve positive behavioural change, reduce absenteeism and raise academic performance for pupils.

Greenhouse Sports is a London-based charity that uses sport to engage young people and improve their life chances. Greenhouse Sports partners with schools, embedding high-quality sports coaches into the school environment to deliver full-time programmes that empower and inspire young people growing up in disadvantage to reach their full potential. Since 2002, the charity has worked with over 40,000 young people.

Recently, Greenhouse worked with Loughborough University researchers to scope the impact of our programmes and identify the full breadth of what a Greenhouse Sports intervention can do. Early findings suggest engagement with Greenhouse Sports raises attendance and academic performance and improves mental and physical wellbeing in young people. Further research will be conducted in 2018 to elaborate on this impact.

Greenhouse Sports is currently undergoing a new capital project, transforming a deconsecrated church in North Westminster into a flagship state-of-the-art sports centre that will be utilised by both the community and Greenhouse Sports participants.

Pro Bono Economics (PBE) helps charities and social enterprises understand and improve the impact and value of their work. Set up in 2009 by Martin Brookes (Tomorrow's People) and Andy Haldane (Bank of England), PBE matches professional economists who want to use their skills to volunteer with charities. PBE has over 500 economists on its books and has helped over 300 charities large and small, covering a wide range of issues including mental health, education, employment and complex needs

Effectiveness and cost-effectiveness of The Daily Mile on childhood weight outcomes and wellbeing: a cluster randomised controlled trial | International Journal of Obesity ow.ly/7DGQ30qd6lv

RT @russellfindlay: For example - it is cost effective for girls, it is unclear if BMI after 12 months is the best indicator of success .. this is exactly the kind of research which should be discussed by those working in the sector to learn and improve cc @sport_thinktank @sportrectweets @_ukactive

For those leaving us today, thanks for coming & have a safe journey home😀

RT @sportrectweets: Our Fit for the Future Convention is nearly underway in Loughborough!