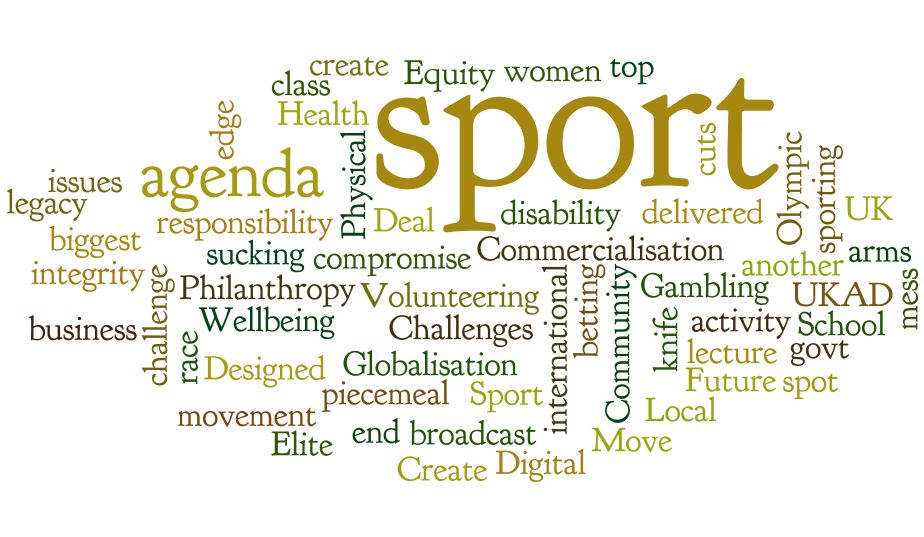 Another survey was released this week ahead of the Commonwealth Games showing the low level of sports participation. This time Why Research showed only 28 of adults were taking part once a fortnight. The latest Active People Survey figures will be released this week again showing how difficult it has been to shift the dial and get millions of people to actively take up a regular sport.

The findings and press release from Why is below. Whatever we think of the simple methodology the fact that Radio 5 Live picks up these stories and drives home the message we are a nation of sports fans not sports participants it makes the task even harder.

This week when the APS figures are released we will beat ourselves up on the relative failure to grow the numbers dramatically. We have become obsessed (to the tune that all our RoI in sport is seemingly linked to growth). Yet when did this happen, When did we stop valuing the contribution of the 8-9million adults who do play sport and the contribution that makes?

Over the coming months we will be developing elements of our sports strategy and the first big question will be what is the purpose of a strategy? Is it just about adding 1 million people to those already playing or is it about creating the best environment for those who will be involved. We need to understand why government and lottery intervenes in sport, recreation and physical activity as the starting point before we develop the rest of the strategy. Without fully understanding the motivation we will get it badly wrong.

2012 Olympic legacy has boosted cycling but survey finds one in three adults only take part in sport once a fortnight.

Only one in three UK adults take part in sport once a fortnight, according to a recent survey carried out by leading market research firm Why Research.

The survey of 1,000 people found that cycling, football, and tennis were the most popular sports. With the 2012 Olympic legacy and the forthcoming Commonwealth Games, over half of the respondents said they would like to try a new sport. Nearly three quarters of those surveyed said they want to become more active.

With Glasgow soon to play host to the 20th Commonwealth Games, the poll investigated what could stopping so many UK adults from taking part in sporting activities.

Director of Why Research, Jo Fawcett, commented on the survey findings: "The UK has always been one of the best sporting nations in the world, but our research indicates that not as many adults are taking part in the sports they love as much as they should do to help maintain a healthy lifestyle.

"Whether it's the cost of joining clubs or buying equipment, accessibility to sporting premises, or even just a lack of enthusiasm, the fact that only 28% of respondents consider themselves to be somewhat active in sports shows room for improvement amongst the adult population.

"However, we know nearly three quarters of those surveyed said they want to be more active, and the legacy of the the 2012 Olympic Games and the forthcoming Commonwealth Games in Glasgow have no doubt boosted sporting activity in the past two years.

Why are so few UK adults playing sport?

The survey found that lack of time and the cost of participation in sporting activities of interest (mentioned by 48% and 33% respectively) are the main barriers in stopping people playing the sports they want to. Lack of access to facilities for sports that are of interest is a barrier for 21% of those who have the will but not the way.

The 2012 Olympic legacy has helped cycling become one of the most popular sports for those surveyed (12%), with tennis just taking the lead at 12%. Correlation could be found between these statistics and continued UK success and press coverage of these events.

"There is clearly a disconnect between the rhetoric around an Olympic legacy and the situation being experienced on the ground, and a legacy of participation will not deliver itself1." This was a finding reported by The Sport and Recreation Alliance, the independent umbrella body for the national governing and representative bodies of sport and recreation.

Viewing more than doing: 87% of adults surveyed have watched sports on TV and 68% have watched sports live; football, tennis and athletics topped the list of spectator sports. Two in three of those surveyed (66%) watched the 2012 Olympics on TV and 15% watched at least one Olympic event live. Over three in five (62%) expect to watch TV coverage of the forthcoming Commonwealth Games and 5% have been successful in applications for tickets.

The Race to Volunteer: More than one in ten of the 1,000 adults surveyed (11%) applied to volunteer at either the 2012 London Olympics and/or the forthcoming Commonwealth Games. A majority (74% of those who applied) were successful in their applications. Men and women, across all age groups but particularly those aged 25-34, applied to be volunteers.

Why Research Limited is an independent market and social research agency based in Edinburgh. Formed in 2011, the company brings together the combined experience of four Directors who have worked in a variety of sectors during their careers. In 2013, the agency was a finalist in the Market Research Society (MRS) Awards in the Best New Agency category. All four directors are members of the Market Research Society.

These findings are drawn from a survey amongst a nationally representative sample of 1,000 adults across the UK, designed by Why Research and administered online via One Poll.