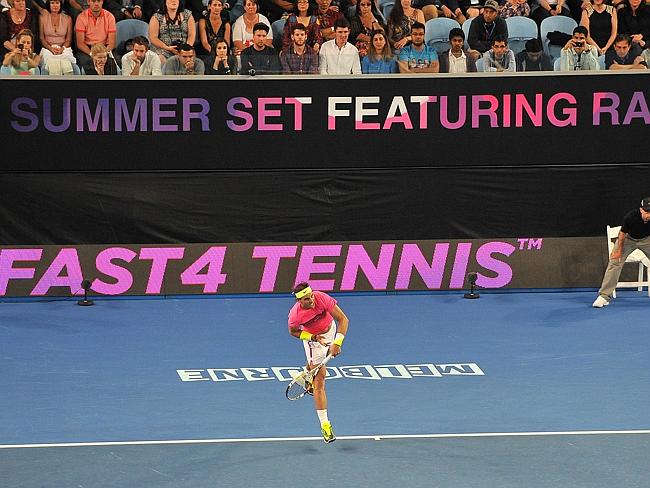 With falling participation rates in many sports, including swimming, golf, badminton, tennis, squash and basketball, attention has turned recently to the formats of traditional games and how well they currently attract new participants and audiences. Prominent sports figures such as Rory McIlroy and John McEnroe have voiced concern over the pace of play and the length of matches in their respective sports, amid fears that both golf and tennis are losing their appeal to younger people. This need to attract new audiences and participants is fuelled not just by poor participation rates, but competition from other activities and media – computer games, social media, an ever-expanding array of television channels and internet sites vying for the attention of the next generation of consumers. New formats can show people that a sport is evolving and staying relevant, but also better utilise social media and facilitate the incorporation of data & technology for better fan engagement.

There is a somewhat apocryphal claim that younger people have shorter attention spans these days – but whether or not this is true the competition for our attention is increasing and this means that in sport the longer the ball is in play, the better, as far as decision-makers are concerned. Step forward Fast4 Tennis for example, a new, shortened incarnation of tennis premiered in Melbourne before the Australian Open this year, named after the four new rules it brings to the game: no advantage points; no lets; first to four games wins the set and a tie-break at three games-all. The result is a shorter match (completed inside an hour) with the ball in play for a greater proportion of match-time— key elements for drawing in audiences and participants. It's no doubt at least partially inspired by the success of Twenty20 cricket in Australia— the Big Bash League enjoys live free-to-air coverage throughout the summer holidays with an average 70% of the audience that watch the national team at Test-level. Sports without officially established alternative formats are constantly working on tweaking their rules in order to keep dead time to an absolute minimum. Those in charge of baseball and American football are particularly congnisant of this issue as their sports have often drawn criticism for excessive match-time and little ball-in-play time. But in order to maximise engagement it's not enough just to initiate new formats, they have to be fully supported and given maximum spotlight. While Australian Twenty20 cricket can boast viewing audiences of 931,000, English Twenty20 achieves nothing like this and whether the UK has the means to overcome the prohibitive costs of pay-TV in order to attract the largest viewing audiences to cricket, or to any sport outside of football remains to be seen. The Big Bash League example however demonstrates that when there is regular live broadcasting at prime times and the most is made of simultaneous social media activity, fans can be fully engaged and advertisers are drawn in.

Viewing however, is not the same as playing. When it comes to attracting new participants, are the same innovations that increase viewing popularity the same as those that can boost a sport at its grassroots? Criticism of The London 2012 Olympics highlighted the fact that the enormous popularity of the events live and on television did not translate into participation improvements, identifying the UK as a nation of watchers, not a nation of doers. There is evidence however that shorter, small-sided versions of traditional sports are attracting consumers, consider for example the recent growth of 5-a-side football and the associated proliferation of businesses like Power League and Goals. Padel Tennis is a racquet-sport that originated in Mexico and is now enormously popular across South America and in Spain and could be tennis's answer to Futsal, the game that supposedly nurtures the talents of the finest South American footballers and is now being increasingly utilised as a medium for coaching by the FA. There are currently only 18 Padel courts in England according to the Padel England Association, but a court only takes up half the space of a full tennis court and the game is easier to learn than traditional tennis, a key factor in retaining young beginners. Hockey 5s is another small-sided game that many say must be promoted more, with the argument that it offers great developmental value for elite talent, as a platform for future elite players in the 11-a-side game that is already widespread in Germany.

How should the sector adapt to make the most of new sports and new takes on traditional formats? Shorter formats, where they are cheaper, more accessible and easier to learn, could offer children more options in school sports and have great potential as activities that can introduce new consumers to the full game. National Governing Bodies should be encouraged to embrace shorter formats and utilise them as introductions to their traditional sport—and this should be reflected in the distribution of funding. Local authorities and leisure centres can offer a wider variety of these new versions of traditional sports by incorporating them into existing spaces, as some already do, though this is often subject to official recognition of an activity by Sport England. Where there are the resources, looking to invest in versatile multi-sports indoor and outdoor facilities that can accommodate these new sports will bring in new participants: those looking for something different to the established leisure-centre fayre of squash, swimming and the gym. There are many avenues for research into new sports and shorter formats: finding out exactly what impact they are having on participation, what barriers there are to increasing their accessibility and popularity will help identify strategies for bringing new sports to the wider population. The Active People Survey already includes Futsal and small-sided football games, but as more new sports gain popularity, Sport England and the Active People Survey, in order to take an accurate snap-shot of the nation's sporting habits, must be adapted to encapsulate the participants of the newest activities.

Luke Regan is Research Officer at The Sports Thank Tank

Plenty of discussion around social value of sport in recent weeks - what is it and why is it important? twitter.com/_leisurene…