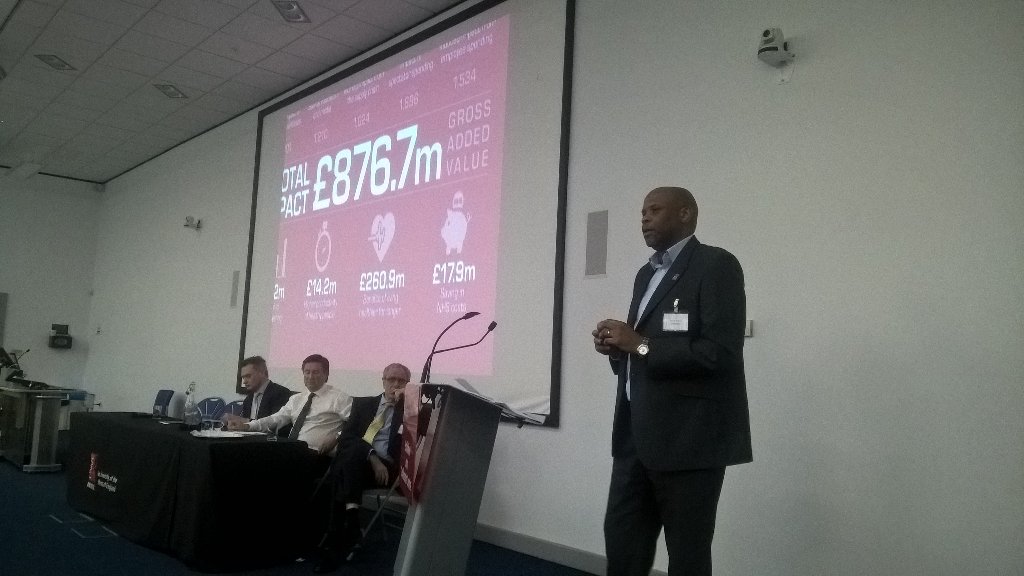 After a previous article on the Economic Impact of Sport in the West of England (http://bit.ly/1PIxr49), I had the opportunity to present on the impact of health on productivity at the West of England Local Enterprise Partnership (LEP) Annual Conference on the 12th November, 2015. Appearing alongside business leaders and academics, I wondered whether the message I had would stand up.

I followed Professor Andrew Graves (BathUniversity and MIT) discussing productivity and challenges regarding UK manufacturing, engineering and design; John Pritchard highlighting GKN Aerospace's approach to ensuring their workforce is productive through engagement, as well as Kalpna Wolf's presentation of the LEP Skills Prospectus. My message on the impact of a healthy workforce had a resonance with the audience of 200 people from business, local government and higher education.

Being physically active is a catalyst to productivity – it is the 'baking soda in the cake of productivity'. Whatever else you do to develop a productive workforce, ensuring they are active multiplies the impact.

The context behind my presentation was simple: as a nation, we are not active enough. Modern life (including working life) is making us more sedentary – at work, at home, and getting to and from work. Guidelines state we should be active for 150 minutes every week, spread out however we choose – and this isn't about running a marathon, just a few minutes a day getting slightly out of breath.

Scarily, a third of men and almost half of women are not active enough for good health. When you realise we are less active now than we were 50 years ago, it makes you wonder where we will be in another 50 years if things stay the same – is Wall-E's 'world' a possibility?! (one for the film buffs!).

Public Health England's latest guidance on physical activity highlights a number of specific benefits of being active (see https://twitter.com/PHE_uk/status/664141623023026176). Physical activity is proven to reduce common physical and mental ailments, better than many drugs doctors often prescribe, and with fewer side effects.

Wesport's research with the University of The West of England (UWE) BusinessSchool found that in a single financial year, Sport and Physical Activity contributed £876.7m to the West of England. For every £1m invested in Sport and Physical Activity, a total benefit of £2.82m is added to the local economy. My presentation allowed me to focus on some of the added impacts beyond direct finance of sport in key areas.

For example, cost savings to the NHS as a result of avoiding different types of illness is worth £17.9m to the West of England; the health benefits based on living healthier for longer is valued at nearly £261m.

Additionally, regular exercise has both a short and long-term impact on the level of an individual's income. For children and young people this translates into better educational attainment and therefore into higher earning power in later years. There have been a number of research studies addressing the question of impact of physical activity on earnings, suggesting that an individual exercising at least once a week earns a premium of between 5.2% and 17% in terms of higher income compared to a sedentary person. This premium gives rise to additional income of £14.2m gained by active people.

According to NOMIS, there are 699,000 employed people in the West of England, earning an average of £105 per day. Nationally, we know there are 5.31 sick days per person per year, with back complaints and stress the 2 most common reasons for absences.

If you are physically active, you are 20% less likely to take time off sick, and 27% more likely to return quicker if you do. If we reduce sickness absences by just one day per year, we will save West of England businesses £73.8m per year. This figure is just what is lost in time away from work, not even touching on what staff 'produce' while in work. My colleagues at Black Country BeActive have found similar impacts in their area.

There are some simple ways to help businesses encourage an active workforce.

Bike to work schemes are similar to childcare voucher schemes – paid for through payroll, saving on tax. Somewhere to park bikes, and change/shower also aids people to make an active decision about travel to work.

While in work, could your meetings be mobile? Do they have to be sitting down around a big table? Can staff work standing up?

What is in your HR policies? At Wesport, we allow an extra 30 minutes twice a week added to lunch for staff to be physically active.

Through programmes like the Workplace Challenge (www.workplacechallenge.org.uk/wesport) which Wesport delivers locally with the British Heart Foundation, there isfree support out there for businesses to engage their staff in sport and physical activity.

The benefits of a healthier workforce go beyond the impact on physical and mental health, impacting on communication, team working, building networks and improving staff engagement within your business, in turn improving productivity.

Whatever your plans to improve productivity, sport and physical activity can enhance them. It is in every organisation's own interest to encourage an active workforce.

Doing something is better than doing nothing.