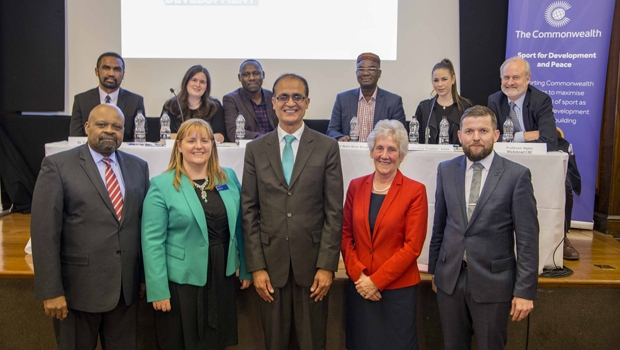 With just under 2 years to go before the 2018 Commonwealth Games, over 100 people gathered at South Africa House in London to attend the 2016 Commonwealth Debate on Sport and Sustainable Development, an inaugural debate to mark April 6th 2016 as the third International Day of Sport for Development and Peace. Six expert panellists debated the motion: "To maximise the contribution that sport can make to sustainable development, governments should focus investment on sport for health."

The debate was a lively affair with well-informed contributions from an articulate panel. Arguing for the proposition, the three panellists emphasised the seriousness of the global health crisis and lobbied for health as the 'gateway' development goal in achieving improvements in other developmental outcomes such as education. Health is well-researched and has an abundance of alarming statistics. As Dr. Temo Waqanivalu from the World Health Organisation stated in arguing for the motion, so many deaths from non-communicable diseases (heart disease, Type 2 diabetes, cancer and chronic respiratory disease: 38 million deaths per year globally) are relatively easily preventable through increased physical activity.

This was countered by three speakers who focused their presentations on the myriad benefits of sport beyond health, arguing that to focus investment on health would be too narrow a view and would overlook sport's contribution to sustainable development goals such as gender equality, inclusion, peace and economic growth. Professor Myles Wickstead CBE and his team noted that consensus among nations, as well as global and international bodies like the UN, is that sport has many benefits beyond health and argued it would be regressive to overlook these.

In particular, Dr. Oscar Mwaanga from the University of Southampton Solent, made a compelling case that investment should be focused health outcomes. He stated that sport is no longer seen as a 'magic bullet' to all development problems. He highlighted a gap between theory and practice when it comes to sport for development, that the outcomes of sport for development programmes often fall short of the tangible benefits we anticipate. He emphasised that decisions must be based on evidence, that we must bridge the gap between definitions and the reality of sport for development generating real-world improvements in people's lives. Dr. Mwaanga urged that we recognise the evidence for sport and physical activity as a tool in improving health is substantial and we should focus investment on health to maximise the return on using sport to extend and improve lives.

As expected, many of the arguments made during the debate are directly applicable to UK sport policy: the impact of sport on health is leading a strong evidence-base. It would seem blinkered however, to ignore the similarly significant potential sport has in the UK as a facilitator of inclusion, educational improvement and reducing crime and anti-social behaviour. Rather than only focusing on health outcomes because this is where the evidence currently lies the sector, working with the academic community, must urgently address this research gap if sport is to warrant substantial future investment as a developmental tool. This research must produce real-world implications upon which policy strategies can be based.

The 2030 Agenda for Sustainable Development, adopted by the UN General Assembly in 2015, recognises the growing contribution of sport to the realisation of development and peace. The Commonwealth Secretariat has since undertaken a consultation on how sport can contribute to some of the development goals adopted by the UN. The results of this consultation are published in an analysis report available via: sdp@commonwealth.int