Report from the 2017 Commonwealth Debate on Sport & Sustainable Development

Report from the 2017 Commonwealth Debate on Sport & Sustainable Development 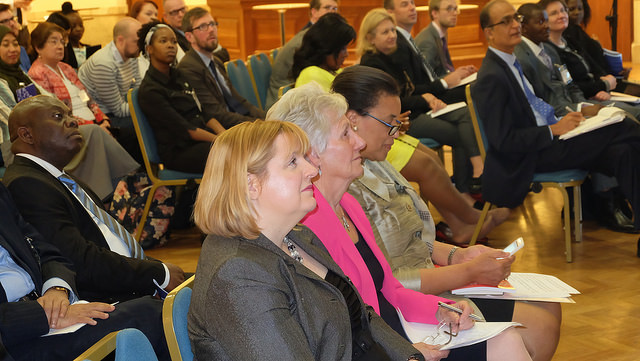 April 6th was the International Day for Sport and Development. Following the inaugural 2016 debate (covered by the Sports Think Tank here), to mark the occasion, six influential people from the sport and development arena convened to debate the motion: "Corruption in elite sport undermines the potential to promote development and peace through community sports."

The event was hosted at Australia House in London, an appropriate venue considering the next Commonwealth Games in 2018 will be hosted by the Gold Coast in Australia. The Gold Coast Games will be the first Games to offer equal medal opportunities for men and women and will be the first to have a "reconciliation action plan" , using the Games to promote awareness of Aborigines and Torres Strait Islanders.

As in the previous debate, while the subject matter was far from frivolous, rather than a serious debate between competing philosophies, this was a celebratory and awareness-raising exercise by an organisation which is evangelical about the developmental influence of sport across society. It was somewhat of a running joke that the team debating against the motion had the considerably more difficult job convincing the audience and judges, but this helped keep the discussion light-hearted and the debate played out in good spirits.

Some valiant attempts were made to argue against the motion, making points such as how grassroots sport and its benefits will transcend the influence of elite sport regardless, continuing to positively influence society no matter how elite sport is brought into disrepute. It was heard how the negative aspects of global sport can never outweigh the positive developmental impacts of sport in its grassroots incarnation.

Most memorably though, it was stated how all industries, institutions and walks of life have their bad apples and corrupt members and how sport is no different in this respect from any global arena. Furthermore, public perception of sport is often at the mercy of the media, which plays a significant role in shaping the narrative. While we are seldom led to believe so, people generally have both good and bad qualities and do both good and bad things. Oscar Pistorius was cited as an example of someone who has damaged the reputation of elite sport, but previously played an integral role in positively changing perceptions of disability on an international scale.

In arguing for the motion, familiar but compelling arguments were made citing evidence of the debilitating effect corruption in elite sport can have on the wider world of community and grassroots sport. It was heard how integrity issues in elite sport lead to a loss of trust and credibility at grassroots level, in turn leading to drop-out and reduced participation rates, hampering sport's power to boost development. It was heard how sponsorship and investment is also lost on the back of corruption issues and reputational damage, with companies deterred from investing due to fear of damaging their brand.

Some related survey evidence for the impact of integrity issues on sport involvement was found in a recent BBC survey on doping and the Olympic Games in Brazil last year, with over half of respondents from a global sample stating that doping scandals do detract from their interest in the event.

What was universally agreed was that poor governance, leading to a lack of transparency and accountability, is the root cause of a lack of integrity in sport, at all levels. This is an issue currently prominent in sport in the UK, with recent upheaval among sports bodies complying with the new Code of Sports Governance.

It is hoped that as well as providing top-down improvement in equality and diversity across sport in the UK, that these governance reforms with better protect sport from the pernicious influence of corruption and its impact on community sport.

The event was live-streamed and can be listened to at the link below where full details of the event and speakers can be found.