Is Sport in the UK Suffering from a Cultural Hangover of Sexism? Part 1

Is Sport in the UK Suffering from a Cultural Hangover of Sexism? Part 1 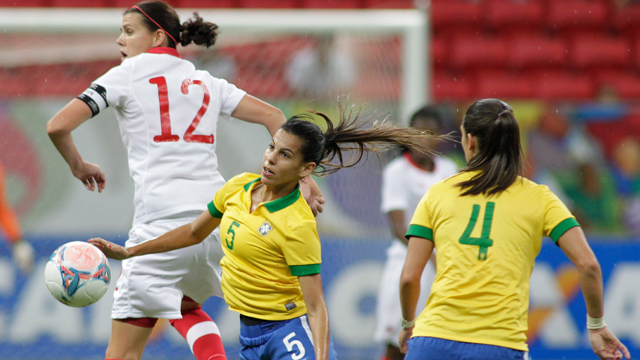 BBC's 100 Women initiative consists of a selected panel of 100 influential women who investigate gender inequality issues. Their time of looking at the topic of sexism within sport recently came to an end, and solutions were applied to the case of Brazilian football, where only 5.6% of women play the sport. The issue was described as a 'cultural hangover' from a sexist past, as women were traditionally banned from playing football. This of course is a great shame, but how does their 'cultural hangover' relate to Sport in the UK? After all, the last time I checked, we are a nation that prides itself on striving for gender equality, and Britain hasn't banned any women's sports for generations.

At a first glance, the issue seems irrelevant to the way we address gender in sports. However, after reflecting on the problem further, I can't help but notice that just as in Brazil, sexism in sport is hanging still around like a bad smell in the changing rooms of Britain.

When it comes to the judging of gender equality in sport, the most obvious way to measure gender equal opportunity is by comparing male and female wages. It is no secret that the sport industry is receiving a free pass when it comes to gendered pay gaps, as women are heavily underpaid compared to men. Take football for example; female England Internationals earn roughly £16,000 a year, with their highest earning player Steph Houghton earning £35,000 a year, a tenth of what top male earner Wayne Rooney makes in a week. Let that sink in for a second. Furthermore, there are still a lot of female athletes that don't get paid at all.

The England Women's National Rugby team are given modest training contracts based on upcoming tournaments, meaning that they often end up juggling full-time jobs, families and rugby commitments, whilst – as we all know – their male counterparts can comfortably dedicate their entire lives to the sport. The most recent controversy regarding this issue was when the Rugby Football Union decided not to renew the women's contracts earlier this year, even with the knowledge that the contracts would cost roughly 0.252% of their annual budget.

Of course, there is a financial reason why we make an exception for athletes. Whilst other industries are able to adjust their wages, representation and recruitment to achieve gender equal working conditions, the sport industry relies heavily on sponsorship-based funding for its prize money and wages. This means that the players that bring in the most sponsorships, ticket sales, spectators and other sources of funding will ultimately receive the highest pay.

With our current broadcasting and sponsorship systems, this means that men's sport attracts a lot more sponsorship than women's. This is arguably due to men's superior physical abilities making for more popular watching than women's sports. In addition, the majority of the sport-watching population is made up of men – so if women have less physical ability and appetite for sport, maybe men should be left to it? Let's take a look at some of the arguments supporting this:

'Men Are Better at Sports'

We can start by considering the opinion that male sports are more enjoyable to watch due to a higher level of physical ability. Assets such as denser bones (for increased muscle support), longer proportional limbs, and a larger amount of oxygen-carrying blood cells, make men faster and stronger than women. It would be ridiculous to claim that men and women can play to the same standard, but only if we measure the standard according to male attributes.

This is a little bit like measuring who is the more skilled animal out of a monkey and a bird, based only on their ability to fly. If we instead judged sports through a variation of elements, such as tactics, technique and agility, we would be able to appreciate women's sport to an entirely different degree. For example, women's football is slower than men's, but in Laura Williamson's opinion has 'much more emphasis on agility and technical ability.'

The second argument commonly made is that men inherently have a passion for sports, and women don't. Yes, it is true that as it stands, the majority of people who watch sports are male. However – and I'm no scientist so please correct me if I'm wrong - I can say with some confidence that there is nothing in the male Y chromosome that particularly contributes to an interest in sports. Therefore, we can assume that the lack of interest for women is due to social influences.

Factors such as upbringing, gender-division within sport, and a lack of positive exposure of female athlete role models that inspire young girls to play sports, all contribute to gender sway. Combine this with girls seeing how female athletes are being undervalued and underpaid in comparison to their male counterparts (if they are 'lucky' enough to get paid at all), as well as being objectified and criticised based on their appearance, on how little clothing they wear or how feminine they are, rather than on their sporting abilities.

This is further supported by the fact that women who choose to play more masculine sports receive next to no media attention or sponsorship opportunities – after all, how many female rugby players can you name? There seems to be less of a pull for women to watch and engage in sports, and especially less 'feminine' sports, than there is for their male counterparts.

May Reinholdsson is Marketing Executive at Sport:80. This is Part 1 of an article first published in November 2017 at http://www.sport80.com Part 2 will be published next week.