Is Sport in the UK Suffering from a Cultural Hangover of Sexism? Part 2

Is Sport in the UK Suffering from a Cultural Hangover of Sexism? Part 2 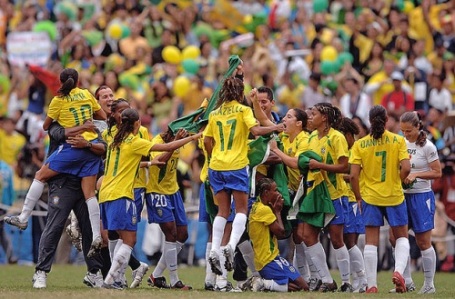 Following on from last week's post, May Reinholdsson continues to explore the roots of gender disparity in sport in the UK:

'The Public Only Wants to Watch Men's Sports'

Another important aspect of engaging girls and women in sports, and to provide women's sport with a larger platform for funding, is the idea of increasing broadcasting and media coverage. Indeed, a lot has been done in the industry to address the gender pay gap in recent years; we are seeing more and more women in the roles of sports presenters, large media hubs such as Sky are investing in Women's Netball, and female players are receiving increased public recognition resulting in the occasional training contract. However, the statistics don't necessarily reflect this, with the latest report on media coverage by Women In Sport demonstrating concerning numbers:

· 2% of national newspaper sports coverage is dedicated to women's sport

· 5% of radio sports coverage is dedicated to women's sport

· 4% of online sports coverage is dedicated to women's sport

In addition, publicly-funded broadcaster BBC dedicated a shocking 93% of its Wimbledon coverage to men's tennis in 2016, showing less than half of Serena Williams's first two matches.

The only positive to come out of the situation was that the BBC received a lot of negative backlash, as especially when a broadcaster is publicly funded, there is no excuse as to why it's not investing in women's sports. The BBC should be representing the interests of the public, and, you know, the women in it. Furthermore, the publicly owned broadcaster isn't ran based on sponsorship and profit in the same way as privately-owned businesses, meaning that the financial argument doesn't quite hold up.

With statistics such as these, it is no wonder that women's sport receives less funding than men's. After all, without coverage, how is the public meant to form an appreciation for women's sport? If for example, women's football was given more viewing time, and women were provided with a real platform to showcase their game, our societal attitude towards women's football would change and funding would increase. We can see this clearly in several examples of women's sport coverage leading to increased public attention, an improved understanding and respect, and most importantly more funding and sponsorships.

In the case of the Women's World Cup in 2015, the excitement and talent of the England team was picked up by a huge amount of football fans. The total viewing UK audience went from 5.1 million in 2011 to 12.4 million in 2015, a huge increase that would not have been possible without proper broadcasting and media coverage.

It is no coincidence that this was the first ever time that the BBC chose to broadcast the entire tournament live, and women's football received more positive press and public appreciation than ever before.

This certainly makes me wonder what other fantastic tournaments and competitions we have missed out on within women's sport, simply because we haven't been able to access them. And if we had, would women's sport be at a completely different level today?

In terms of coverage, there is potential for the vicious cycle of women in sport to turn virtuous, as increased coverage leads to increased viewings, resulting in more sponsors and funding. This then results in more money being invested into the quality of the sport, from coaches to pitches and wages, allowing female players to train full-time at a higher level than before.

In addition, with female players achieving more positive media attention that goes beyond their looks and 'short shorts', and instead focuses on their sporting abilities, young girls would be provided with the successful role models that men have had for centuries.

This would show them that a career in sports is financially viable, respectable and free of objectification and scrutiny. With more girls pursuing sport as a prosperous career, the female status within the football industry would be raised, and we can easily imagine how the cycle of funding, respect and engagement would grow in the same way that men's football has.

It seems that the real issue is not in physical ability, but with the UK suffering from a cultural hangover of sexism within sport. This becomes even more evident when we look at other countries that have managed to address these issues in various ways; for example, in the US it is the law for college sports to receive equal funding for men and women.

The US national football team tends to both 'outsell the men's in gate receipts, and outperform them when it comes to incoming revenue' – Kessell. With more financial investment at grassroots and college levels, women's football is of high quality, considered with respect, and as a result fills out arenas.

The funding from gate receipts and sponsorship are then fueled into improving the game further, and we can easily how the vicious cycle is becoming a virtuous one. This shows plenty of exciting potential for women's sports in the UK, and with increased pressure put on broadcasters such as the BBC, in combination with pushing for more funding at a lower level, women in sport have a real chance at eventually getting the respect, recognition and wages that they deserve.

May Reinholdsson is Marketing Executive at Sport:80. This is Part 2 of an article first published in November 2017 at http://www.sport80.com