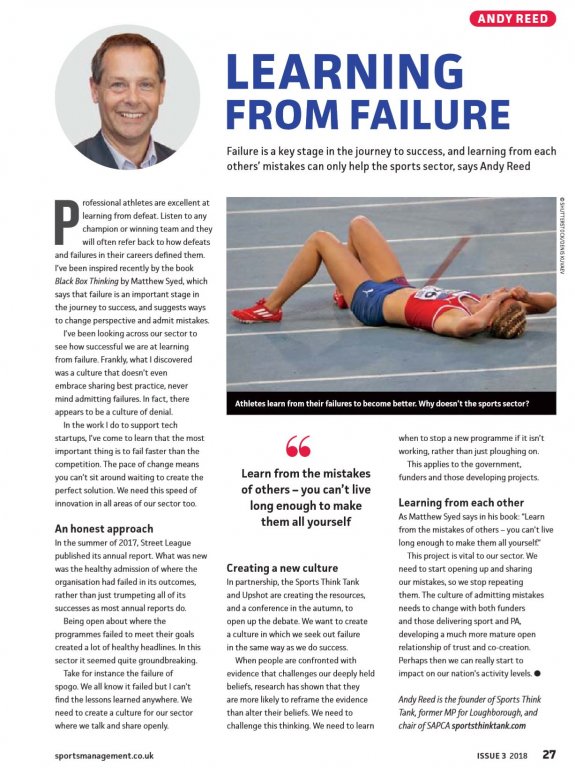 Professional athletes are excellent at learning from defeat. Listen to any champion or winning team and they will often refer back to how defeats and failures in their careers deﬁ ned them. I've been inspired recently by the book Black Box Thinking by Matthew Syed, which says that failure is an important stage in the journey to success, and suggests ways to change perspective and admit mistakes. I've been looking across our sector to see how successful we are at learning from failure. Frankly, what I discovered was a culture that doesn't even embrace sharing best practice, never mind admitting failures. In fact, there appears to be a culture of denial. In the work I do to support tech startups, I've come to learn that the most important thing is to fail faster than the competition. The pace of change means you can't sit around waiting to create the perfect solution. We need this speed of innovation in all areas of our sector too.

An honest approach In the summer of 2017, Street League published its annual report. What was new was the healthy admission of where the organisation had failed in its outcomes, rather than just trumpeting all of its successes as most annual reports do. Being open about where the programmes failed to meet their goals created a lot of healthy headlines. In this sector it seemed quite groundbreaking. Take for instance the failure of spogo. We all know it failed but I can't ﬁ nd the lessons learned anywhere. We need to create a culture for our sector where we talk and share openly.

Creating a new culture In partnership, the Sports Think Tank and Upshot are creating the resources, and a conference in the autumn, to open up the debate. We want to create a culture in which we seek out failure in the same way as we do success. When people are confronted with evidence that challenges our deeply held beliefs, research has shown that they are more likely to reframe the evidence than alter their beliefs. We need to challenge this thinking. We need to learn

when to stop a new programme if it isn't working, rather than just ploughing on. This applies to the government, funders and those developing projects.

Learning from each other As Matthew Syed says in his book: "Learn from the mistakes of others – you can't live long enough to make them all yourself." This project is vital to our sector. We need to start opening up and sharing our mistakes, so we stop repeating them. The culture of admitting mistakes needs to change with both funders and those delivering sport and PA, developing a much more mature open relationship of trust and co-creation. Perhaps then we can really start to impact on our nation's activity levels