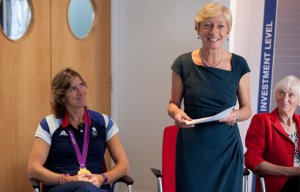 Liz Nicholl CBE, Chief Executive Officer of UK Sport, the nation's high performance sport agency, has today (Tuesday 13 November 2018) announced plans to step down next summer after what will then be 20 years in a leadership role at UK Sport, nine as CEO.

Liz joined UK Sport in 1999, just two years after the organisation was established by Royal Charter following a dismal British performance at the Atlanta 1996 Games where Team GB finished in 36th place in the medal table with just one solitary gold medal.

In her first 10 years, Liz led the work of the Performance Directorate as the Director of Elite Sport. She became the Chief Operating Officer in 2009 and was then appointed to the CEO role in September 2010. During her tenure, Great Britain and Northern Ireland achieved historic performances at every successive Games building up to the host Games in London 2012 with an incredible 65/120 medals achieved respectively at the Olympics and Paralympics and 3rd place on the medal table. This achievement was then surpassed in Rio where both Team GB and ParalympicsGB finished in an unprecedented 2nd place on the medal table in amassing 67/147 medals overall. Performances at the Winter Games from Sochi in 2014 and PyeongChang in 2018 have also witnessed historic medal success.

Over Liz's 20 years in post, she has played an integral role in the success of Team GB and ParalympicsGB as one of the architects of the system of World Class Programme support underpinned by a performance focused investment strategy that has transformed the prospects and achievements of British athletes on the world stage. In this period 863 medals have been won by British athletes at the summer and winter Olympic and Paralympic Games to inspire the nation, powered by The National Lottery and unwavering Government support.

Liz has also overseen a meteoric rise in UK's major event hosting position on the global stage. The UK Sport team played an integral role in the test event series for the London 2012 Olympic and Paralympic Games, as well as helping to bring the World Athletics Championships, two Tour de France Grand departs' and stages, and numerous other premier major and mega events to the UK, hosting them all to an impeccable standard and quality, and finding ways to attract and engage new audiences with sport.

Dame Katherine Grainger, Chair of UK Sport, said: "I cannot thank Liz enough for everything she has done for British sport in her time here. We must never forget the transformation that has occurred under her guidance nor take for granted how many people, myself included, who have been able to realise their potential because of her tireless work.

"I have loved working with Liz and one of the main attractions of taking up this role was the opportunity to work alongside such an inspirational CEO. She is an incredible leader, principled and consistent whilst also being able to seek compromise and collaboration. The spirit of resilience and good humour has seen Liz through countless challenges and her infectious enthusiasm has only increased over the past 20 years. I am of course terribly sad to see Liz go, but happy that she will be taking a well-earned and long overdue break to spend more time with her family. I am also delighted she will continue with us until next summer to ensure we find the best successor and allow a smooth transition and handover well ahead of the Tokyo Games.

"On behalf of everyone at UK Sport, and I'm sure the entire high performance system, I'd like to thank Liz for everything she has helped us achieve and for leading with immutable purpose and compassion."

Liz Nicholl CBE, Chief Executive of UK Sport, said: "It's been a huge privilege to work with so many committed and talented athletes, coaches, leaders, partners and colleagues during my time at UK Sport. I have shared a very special journey with everyone that has been part of our very successful high performance system over the past 20 years.

"Our athletes are undoubtedly among the very best prepared and supported in the world and I am confident that we can continue to build on the successes of recent Games. Tokyo 2020 performance is on track and preparation for the Games environment in Japan is being expertly led and supported by the BOA and BPA. The UK's international reputation as an ambitious, innovative host of Major and Mega Events delivered to quality standards is at an all-time high and enables us to showcase our successful British athletes. The UK is also leading the way in addressing sports Governance and integrity challenges and we continue to contribute positively to sports policy and development around the world.

"None of this would have been possible without the fantastic support and the we have received from National Lottery players and from our Government. Thank you for supporting us on this journey. I hope we have made you very proud.

"By the time I stand down next summer, Dame Katherine will have been in post as our brilliant Chair for two years and UK Sport's new strategy for post Tokyo 2020 will have been launched and will be moving into the operational phase. A new CEO in place by then will have a year to grip the role, while working with my colleagues through that phase, and will experience the Games environment in Tokyo before supporting UK Sport's Board through its investment decisions for the Paris 2024 cycle.

"This really is the best job in sport and I have enjoyed every minute of it. I am confident that it will attract some great applicants and my successor will find British sport in a good position to realise our vision of inspiring the nation in Tokyo and beyond.

"Last but by no means least I'd like to pay tribute to my team colleagues, past and present, at UK Sport. I've been fortunate to lead a wonderful team of people who are totally committed to being the best they can, to apply their expertise and provide advice and support to help others succeed. I could not have sustained this mission for so long without your professionalism and friendship to support me, so thank you; and continue doing what you are doing so well!"

BOA Chairman, Sir Hugh Robertson, said: "As Minister for Sport and the Olympics and, latterly, as Chairman of the British Olympic Association, I have been lucky enough to know Liz Nicholl as a friend and colleague for a decade and a half. During that time, she has been central to this country's series of record breaking performances at successive Olympic and Paralympic Games and designing and delivering a world class high performance system.

"The word outstanding is over used but it, genuinely, applies to Liz."