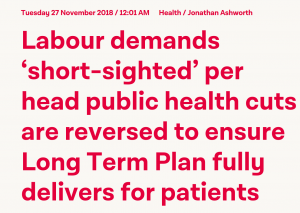 Similarly, specialist drug & alcohol misuse services for children and young people are set to fall to a mere £3.37 this year-a 17% drop from 2017/18.

These cuts follow a string of damning evidence in recent months demonstrating the cruel impact of years of Tory cuts to health budgets:

Earlier this year, Labour revealed that these devastating Tory health cuts are forcing 85% of councils to reduce their public health budgets this year.