Made by Sport Launches

Made by Sport Launches 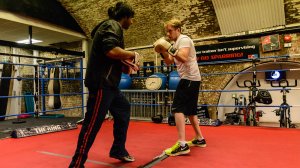 A major new campaign to use sport for good has launched today with royal backing, both real life and sporting.

The Duke of Sussex has leant his support to Made By Sport, a four-year campaign set up to champion the role sport can play in changing lives and raise vital funds for community sport.

Also attending the launch of the campaign, which has set a target of raising £40 million for community sport, are boxing champions Nicola Adams and Anthony Joshua.

Part of the fundraising drive could potentially see us match, up to an agreed level, funds generated by the campaign with National Lottery money.

"Sport is a powerful force for good that can change people and places for the better," said our chief executive Tim Hollingsworth.

"We believe that everyone should have the right to experience and benefit from sport, yet the sad reality is that deep inequalities prevail which mean these benefits are not equally shared.

"Made by Sport is a big, bold new idea that has the potential to challenge perceptions and change many thousands of young lives for the better.

"We fully support the ambition of the campaign to shine a vital spotlight on sport as a driver of social change and hopefully raise much needed funds for the unsung charities in this sector.

"As a major strategic investor in the sport for development sector, through our National Lottery funding, we look forward to exploring with them how Sport England can play our part."

Made By Sport intends to reach its target through a combination of corporate partnerships and public fundraising initiatives.

Part of their initial support will be provided by Richemont, announced today as a founding corporate supporter for the campaign.

Made by Sport is a big, bold new idea that has the potential to challenge perceptions and change many thousands of young lives for the better

And with young people from poorer backgrounds around 50% less likely to play regular sport, Made By Sport chair Justin King hopes the new campaign, which will be the largest fundraising campaign ever undertaken for grassroots sport in the UK, can make a real impact.

"Sport has the power to change lives," he said. "It can teach us skills that last a lifetime and – in a world where local sports is under increasing pressure, where it's easier to play on your phone than in a park and where joining gangs can be more glamorous than joining teams – we believe it can play a pivotal role in how young people develop.

"Today marks the start of a crucial four-year journey for Made By Sport that will see the campaign champion community sports and raise much needed funds to support it across the UK."

Both Joshua and Adams, Olympic and world champions, appreciate the value of sport and physical activity, with boxing giving them a purpose in life.

"Sport to me is more than competing," said Joshua. "It is about the discipline and regiment it teaches you. The lifestyle of an athlete can be taken into any walk of life. It's about how you can improve yourself as an individual through the power of sport."

For more information visit the Made By Sport website Open in a new window.