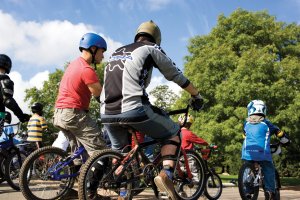 Many congratulations on making it through to the final two candidates for the Conservative Party leadership.

In a few weeks' time, one of you will take the office of Prime Minister. While there will be no shortage of issues vying for your attention, we are writing to urge you to make it a priority to tackle a trend which will have profound future consequences without urgent action.

The health and wellbeing of a generation of young people across the UK is in decline. Government figures show that one in eight young people aged between five and nineteen has a mental health disorder, and one in three is overweight or obese by the time they leave primary school. At the same time, knife crime is growing in our communities and too many young people are lonely or lost. In recent years, pupils in the UK have consistently ranked among the least happy in the world.

It is no coincidence that this comes at a time when young people have never been less active. There is significant evidence to support the critical role of play, sport and physical education in increasing physical and mental health, developing character and life skills, improving cognitive performance, building social connectedness, and promoting social mobility.

Dealing with the symptoms alone not only misses the opportunity to address the root cause of many of these issues, but is allowing some of the potential solutions to be marginalised or underestimated. In state-funded English secondary schools, physical education has been cut by more than almost any other subject with over 51,000 hours of curriculum PE lost between 2010 and 2017. Meanwhile, the Chief Medical Officer's recommendation of 60 active minutes every day is achieved by just 18% of young people; and our own research has revealed only one in four parents is aware of the target.

The need for government action

We ask you to publicly pledge that tackling the decline in young people's overall wellbeing will be a key pillar of your programme for government, and that your government will set out bold, ambitious and measurable targets to harness the power of play, sport and physical education to ensure every child enjoys at least 60 active minutes a day.

While some of us have been pleased to contribute to the ongoing development of government's School Sport Action Plan, this alone will not be enough. It must form part of a broader cross-government strategy focussed on improving the health, happiness and life chances of young people.

This week thousands of schools, sporting organisations and charities have joined together for YST National School Sport Week to celebrate the power of sport and play to improve wellbeing. There is an appetite to do so much more.

In making it a priority to tackle the decline in young people's wellbeing, a government you lead would have the potential to make a meaningful, lasting and transformative impact on individual lives and the future of this country.