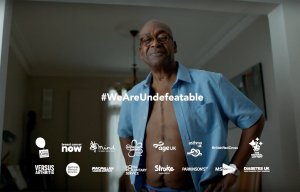 A major new national campaign aims to follow the success of the award-winning This Girl Can initiative by encouraging those with long-term illnesses get more physically active.

The "We Are Undefeatable" initiative will target the estimated 15 million people in England currently living with long-term health conditions, such as diabetes, cancer, arthritis and Parkinson's. Challenging the idea that those with long-term illnesses can't be active, the campaign will run for six weeks across TV, radio, print press and online. There will also be a brand-new, dedicated website (www.weareundefeatable.co.uk) and social media channels, providing inspiration, reassurance and support.

The campaign message will focus on showing the emotional stories of men and women living with a variety of conditions getting active in ways that suit their needs. We Are Undefeatable has received funding from Sport England and has already attracted 15 health and social care charities to sign up.

The launch coincides with research published by Sport England, which looked to identify the barriers preventing those with long-term illnesses from being active. More than a third of people (36 per cent) taking part in the study cited the lack of energy as a main barrier, while two in five (40 per cent) said pain caused by their health condition prevented them from taking part in physical activity.

Tim Hollingsworth, CEO of Sport England said: "You're twice as likely to be inactive if you have a long-term health condition. We believe we can change that because our research shows the majority of people with a condition would like to more active.

"That might be strengthening activities, walking, going to the gym or playing a sport.

"We are very proud to support our charity partners in delivering this new campaign because we know with the right support, sport and physical activity has the ability to change the lives of people living with long-term health conditions for the better."

Brian Dow, deputy CEO of Rethink Mental Illness – one of the organisations to have signed up for We Are Undefeatable – added: "This inclusive campaign recognises the benefits of physical activity for people living with long-term health conditions.

"We know that physical activity can have a significant impact on our mental health, but it's important to recognise the effect of different conditions means that we will all have different goals. Someone living with severe mental illness might consider a walk to the park in the same way that someone else prepares to take on a marathon. This campaign shows that it's time to celebrate and enjoy the little wins that we can all achieve in our everyday lives."

£4m Lifeline fund launched to save and rebuild community sport

RT @SarahBFraser: Please understand motivation and inspiration are not the only factors in behaviour change. Our systems let people down every single day. It is not easy, or people would. There needs to more support and less ‘look at me, I’m so good’, preachy people twitter.com/bbcr4today…

RT @tphollingsworth: Details of our review of Code for Sports Governance together with @uk_sport -200 sports bodies already assessed against current Code driving real positive reform. But time is definitely right for us to seek to renew - not least to drive further increases in diversity & inclusion twitter.com/Sport_Engl…

UK Sport says it ‘will not seek medals at any cost’ after energy drink claims - BBC Sport ow.ly/37M130qXVcx