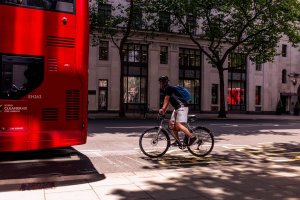 There is certainly the stirring of something radical here: of money and political will unlocking doors campaigners thought would remain welded for ever. Of Britain – dare one say it – becoming more like our European neighbours.

But it is only a start. Much more needs to be done – not simply when it comes to investment and infrastructure but attitudes, too. Dr Rachel Aldred has calculated that per hour spent cycling, cyclists in England are around four times more likely to be killed than in the Netherlands. No wonder many potential converts feel afraid. It doesn't help when many bike journeys involve at least one close encounter of the four-wheeled kind. Or when influential groups, such as the Licensed Taxi Drivers' Association, attack cycling campaigners wanting safer roads as the "Isis of London".

However Coventry's bicycle mayor, Adam Tranter, is cautiously optimistic. "It is clear that it has come from the top, with Johnson and his transport adviser Andrew Gilligan leading it," he says. "That said, the government's own analysis shows that to meet their goals of doubling cycling and walking they will need £6bn."