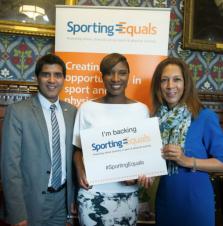 When it comes to being excluded from the corridors of power in British sport, no group is more marginalised than black women.

An investigation by Telegraph Women's Sport has found that of more than 400 board members from leading bodies in the sector, only five are black and female.

The figures are even more shocking than those for overall black board representation laid bare by The Daily Telegraph following the alleged murder of George Floyd and the resultant Black Lives Matter protests.

TWS analysed the boards of 38 leading UK sports organisations, which between them have 415 directors. Almost 90 per cent of them (34) do not have a black woman on their boards. The four which do only account for 1.2 per cent of those 415 positions.

These organisations include all national governing bodies (NGBs) of the 20 Olympic sports funded by UK Sport, which have 197 directors between them but only one black woman in their ranks – Anne Wafula Strike.

"It is disgraceful," says Wafula Strike, the former Paralympic wheelchair racer, who has been on the board of UK Athletics for six years. "It's shameful and embarrassing to our community that this has gone on for so long without people realising."

Read more: Black Lives Matter: The state of play in UK Sport and what needs to happen next

Dame Heather Rabbatts was the Football Association's first female board member – and first and only ever black board member – before going on to found the Women's Sports Group.

"One of the things that we know from much of research, not just in football but in many other areas, is that black women are often the most discriminated against and the most disadvantaged across all sectors," she says.

The discrepancy in the numbers is all the more damning considering the strong tradition of brilliant black female athletes representing Great Britain over a number of decades.

Former Olympic champion Denise Lewis is one of those who has made the jump from podium to the boardroom, having been president of Commonwealth Games England since 2016.

She says: "Everyone knows there aren't many black women, so are they put off even applying because they are not sure their voices will be heard, whether they still perceive it as a male dominated space?"

"A lot of organisations, you find they don't go back to bring them on the boards, or the boards or council positions aren't that attractive to them," she says, highlighting how many such voluntary roles are not career or family-friendly.

And even those who do make it into the boardroom risk discrimination, according to Wafula Strike.

"I've spoken to black people on boards who have told me that they raise an issue, which is dismissed, and then five minutes later another person of another race will raise the same issue and it will be discussed," she says, stressing that has not been her own experience. Lewis, meanwhile, admits to having had "apprehensions" before joining the CGE board but both she and Rabbatts say their voices have been heard in their time as directors.

So what needs to be done to give more black women a voice in the boardroom?

The Telegraph's original findings for black directors of both genders were immediately followed by the Government's promise of an imminent review of its Code for Sports Governance. Targets similar to those in place for gender diversity could soon be accompanied by those for ethnicity.

Acknowledging the code had been successful in getting more women generally on to boards, Rabbatts said: "What it hasn't done is benefited – at all – black women. And you have to be specific about that case and you have to be specific about requiring sports bodies which are, for example, in receipt of public funds, that there is a requirement to have black representation alongside some of the other diverse criteria that you should be looking to achieve."

Alphonsi, who says black women like her currently have needed a "gatekeeper" to progress, adds: "It's difficult because we're going to start to have quotas for everyone. But if we started with the gender quota, I think BAME's quite a big issue right now and I think we do need to have a quota."

Denise Lewis is unsure about the effectiveness of quotas Credit: David Rose

Lewis and Wafula Strike are not convinced. CGE has managed a perfectly balanced boardroom without them, with Lewis recently joined there by Commonwealth gold medal-winning netball captain Ama Agbeze. "I just don't know about targeting," Lewis says. "You need to have people that can do the job and want to be there. And I think the conversation has to be a bit more subtle than that."

Wafula Strike says a review of the code is welcome but adds: "We are always quick to do reviews and show that we are ticking a box. But there is little point in promoting tokenism on a board that has very little appetite for change."

One of those tasked with bringing about that change is Tove Okunniwa, who last year joined the board of Sport England. She is also chief executive of London Sport and has been a director of England Boxing.

"There is a group of people that recognise that the end result of having a diverse workforce would be incredibly beneficial for their organisations," she says, stressing her views are personal.

"At the moment, they've got no idea how to get there and they are frightened, sometimes to the point of paralysis, of doing the wrong thing.

"It's not an unsolvable problem at all. Though it's not perfect, I think we can look at what has been achieved with some real focus and priority with the levels of women that are on boards in the past few years."

Sport England and UK Sport are already in the midst of a drive to increase the number of directors from minority groups in the sector that has seen four black women recruited to such roles. It would not identify them, but Give Me Sport Women editor and journalist Benny Bonsu did join the board of Basketball England last year.

However, none have been appointed to help run the country's richest sports, and Okunniwa says: "There have been pockets of things that have been done but we've got to be honest with ourselves and say, 'It clearly hasn't worked. It hasn't been enough. We need to do better'."