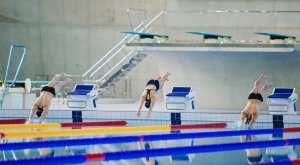 The BBC writes about an interview with Huw Edwards, who said sports centres had "fallen between the cracks" of other services local councils have to provide in law.

Ministers say they are aiming to reopen facilities in England in mid-July.

Leisure centres and indoor sports courts have been closed since March and are yet to reopen in any part of the UK.

A date for their reopening has not been given anywhere in the UK apart from in Northern Ireland where it is provisionally fixed for 7 August.

Mr Edwards said there had been "frustration" that facilities had not been allowed to reopen alongside pubs and restaurants in England on 4 July.

He told the Digital, Culture, Media and Sport Committee he was hopeful the government would announce a reopening date "in the coming days".

But he said his body, which represents leisure centres and facility operators, estimated around a third of facilities would not be able to reopen when allowed.

A £800m injection was required, he told MPs, to cover losses whilst they have been closed and make them sustainable in the "short to medium term".

Mr Edwards said he felt there was a risk of "sleepwalking into loss of public leisure across the country," and the sector's non-statutory status meant it had "fallen between the cracks" when it came to funding.

However unlike other local services such as libraries, waste collection and road repair, councils are not legally obliged to provide them.

The Local Government Association says councils have "limited ability" to provide emergency support because of budget shortfalls they are facing themselves.

In written evidence to the committee, it said a "significant proportion" of charitable trusts that run leisure centres have "very tight" operating margins and small cash reserves to keep them afloat without fees income.

The government has given an extra £3.7bn in emergency Covid-19 funds to English councils to help them cope with pressures from the pandemic.