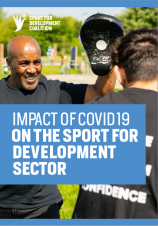 In the report 'Impact of Covid-19 on the Sport for Development sector', the SFDC reveals that the pandemic has had "a significant impact" on the sector from reduced funding and financial security, to a forced reduction and adaptation in delivery, and increased challenges in engaging participants.

This has subsequently had a knock-on effect for the thousands of people in need that the sector serves. The report adds: "Sport for Development organisations are well placed to support the most vulnerable members of our society, having built up significant trust over their years of delivery. The current threat to the Sport for Development sector is having a profound effect on those vulnerable people."

The reports highlights a number of areas including:

The report also looks at the impact of the pandemic on delivery organisations themselves. StreetGames estimates a third to a quarter of the 'Locally Trusted Organisations' in its network stopped operations and furloughed all staff, while Sported reported that – as the full effect of lockdown kicked in – one in four community groups were not sure if they would exist in six months' time.

SFDC Chair Andy Reed said: "The Coalition seeks to bring together and unite all of those organisations who are using sport and physical activity to improve society, and this report demonstrates the remarkable reach of the Sport for Development sector into people's lives and communities across the UK.

"Whilst we hope it proves useful to the DCMS Committee inquiry at this crucial time, we also want this to be a wake-up call to what could be lost if the sector isn't supported soon. These organisations work with some of the most deprived communities and they have been hit hardest. There is a real need to get these back and on a sound financial footing as soon as possible."

The DCMS Committee has been holding evidence sessions "to hear directly from stakeholders, arms-length bodies and Government about what is being done and what further support is needed".

More information can be found on the research page, or on the Sport for Development coalition's website.