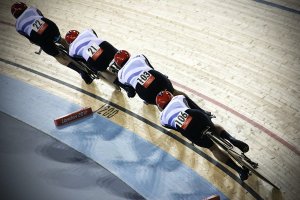 Friday 18 December - UK Sport has today signalled its intent for the UK to become successful in a wider range of sports and build a high-performance sports community which reflects the diversity of British society. The shift is supported by a plan for investment of £352m into an increased number of sports (43) in the build up to the postponed Tokyo Games, through to the 2024 Paris Olympic and Paralympic Games and beyond.

A full breakdown of planned investments is available here.

Today's welcome news provides certainty of funding for Olympic and Paralympic sports in the build up to the Tokyo Games, ensuring athletes can focus on their preparations, ready to make us all proud in Tokyo.

The support provided by Government and The National Lottery also allows UK Sport to look to the athletes of the future who are targeting success at the Paris 2024 Olympic and Paralympic Games and beyond.

As 36 sports, more than ever before, receive World Class Programme funding, the seven Progression investments mark the start of a programme of support in the long-term medal potential of new and exciting sports. The seven sports are basketball, climbing, fencing, skateboarding, surfing, table tennis and weightlifting.

New additions to the Olympic programme, climbing, skateboarding and surfing will receive investment, along with the four other sports. Together, they will play an important role in a wider shift to take a 12-year view of success and kick-start the search for the next generation of Olympic and Paralympic champions.

A new £3m fund will open next year to support sports that did not secure Progression investment with the costs of forming and fielding national squads. This will enable athletes in these sports to attend major international championships and access other events that form the critical path to the Olympic and Paralympic Games, providing a platform on which these athletes can perform, seek Games qualification and build a future case for investment.

Dame Katherine Grainger, Chair of UK Sport said: "2020 has been a hugely challenging year for all of us, but I'm proud to have seen Olympic and Paralympic sport and athletes playing their part in communities up and down the country. The postponement of the Tokyo Games has also shown just how much we've all missed coming together to cheer on our brilliant athletes.

"Over the past two decades we have established strong foundations on which to build the next iteration of this Great British sporting success story.

"The next chapter of this exciting journey is all about how we win on the global stage. I want our sporting community to be known internationally for its people-first approach and also known for upholding the highest standards of integrity.

"I'm delighted that thanks to the support of the Government and The National Lottery players, we've been able to set out clear support for our Olympic and Paralympic sports, to help them get ready for Tokyo and beyond."

Nigel Huddleston, Minister for Sport said: "Over the past decade, one of Britain's greatest success stories has been becoming an Olympic and Paralympic powerhouse, supported by funding from the Government.

"Our elite athletes have helped to inspire many to take up sport for the first time, while promoting the best of Britain abroad and making the country proud.

"As we emerge from the pandemic our athletes will have our full support to focus on delivering more memorable medal-winning performances at Tokyo and beyond."

Sally Munday, CEO of UK Sport said: "Today's decisions signal our future ambition to broaden the areas in which we achieve global success and deepening our societal impact.

"This means supporting more sports via the World Class Programme and Progression Funding than ever before, as well as welcoming more athletes and staff from varied backgrounds into our high-performance sporting community so we better reflect the diversity of the country we represent.

"As a sector we must be better at reaching, connecting and inspiring the British public in order to deepen our societal impact in communities across the country, using the exceptional power of sport and our platform in the British conscious.

"I'm really pleased that we'll be launching a new fund next year which will be open to any summer sport not on World Class Programme or Progression Funding."

The funded Olympic sports are:

The funded Paralympic sports are: