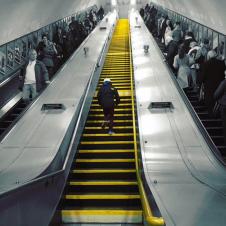 The Euros caused a spike in gambling problems, a charity has said.

Calls to the National Gambling Helpline went up by 28% during the tournament, compared to the same time period last year.

Gamcare, the charity that runs the service, says the return of live sports this summer is leading to a rise in dangerous gambling behaviour.

The charity's chief executive, Anna Hemmings, said: "Certainly people who've had gambling issues in the past tell us that it really impacts on their ability to watch sport. Partly because it's triggering and partly because of (gambling companies') sponsorship and advertising."

Over half of the helpline's advisers say they've spoken to a recovered gambler who relapsed during the Euros, with some saying people reported going to extreme lengths to gamble again.

Some callers said they had been to place a bet on the football in disguise because they had previously asked bookmakers to ban them.

Other callers spoke about using their children's phones to avoid gambling blocks they have placed on their own devices.

"If you've got a consistent run of matches and different sporting activities going on, that's a risky time in terms of gambling escalation. It's easy for gambling to get more frequent and for longer sessions," added Ms Hemmings.