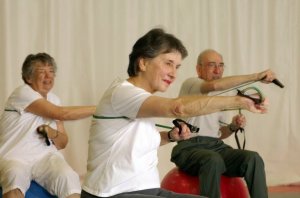 Physical inactivity is one of the leading risk factors for poor health and disability in later life, and yet nearly a quarter of people aged 50 to 70 do less than thirty minutes of physical activity a week.

Tackling the post-pandemic fall in physical activity must be a priority for government, as a new report warns that many people in mid and later life do not feel supported to be as active as they need to be.

The report, 'Keep on moving', examines the motivators and barriers to physical activity for those in mid to later life. Staying independent for longer is a key motivator for many. However, confidence was cited as significant barrier with a number of participants saying they did not use local leisure and gym facilities due to a lack of confidence, or a feeling that they were not aimed at people of their age, body size or shape. These findings emphasise the importance of the fitness and leisure sector creating an inclusive and welcoming environment for people of all ages.

The pandemic has made inactivity an increasingly urgent issue. According to the Sport England's Active Lives Adult Survey, the pandemic led to unprecedented decreases in activity levels during the initial restrictions with 1.2 million (+2.6%) more adults compared to 12 months earlier taking part in less than an average of 30 minutes a week. This increase takes the total number of inactive adults in England to 12.3 million (27.1% of the population). We need to act now to break the sedentary habits many of us developed in lockdown.

From the Centre for Ageing Better.