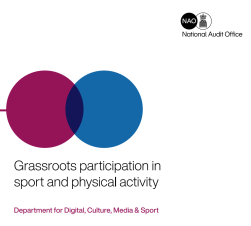 The London 2012 Olympic and Paralympic Games ran at an overall public cost of £8.8 billion. The government committed to a lasting legacy, including an increase in grassroots sports participation. Successive governments have since adopted strategies to further their objectives for grassroots sport and physical activity. These strategies have highlighted the role of physical activity in supporting the government's wider strategic objectives, such as levelling up and tackling obesity.

The Department for Digital, Culture, Media & Sport (the Department) has overall policy responsibility for maximising participation in sport and physical activity. In 2015, it set out its strategic objectives of:

This study focuses on the Department's efforts to increase participation in sport and physical activity. It directs most of its spending for this objective through Sport England, its arm's length body created in 1996 to develop grassroots sport and get more people active across England. Sport England receives around one-third of its income from the Exchequer, with the remainder from the National Lottery. It has spent an average of £323 million a year in the six years since 2015-16, totalling £1.9 billion, and is accountable to the Department and Parliament for how it spends its funding.