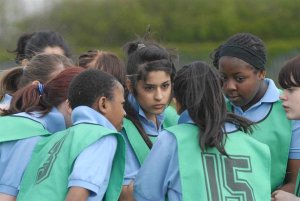 Children's charity the Youth Sport Trust has reported worrying statistics to show that children studying their GCSEs are less likely than other secondary school pupils to access the transformative power of PE.

New analysis of government data by the Youth Sport Trust has revealed that a squeeze to PE hours over the last ten years have seen 36,244 hours lost with 73% of this drop against children in key stage 4 alone.

A further survey conducted by the charity this academic term and launched today suggests secondary schools are only offering an average of 92 minutes to this age group - well below Ofsted's recommended 120 minutes of PE a week.

"We know that for young people sitting GCSE's these will be some of the most stressful years of their adolescent lives. PE has the transformative power to boost mood, relieve stress and more evidence emerges every year to prove the link between physical activity and cognitive development which supports academic progress.

"Too often schools are forced to squeeze PE out of the curriculum in favour of other subjects. Now is the time we need Government to protect the current investment into PE and school sport and those who organise and deliver it and make a concerted effort to understand and value its contribution to health and education outcomes. As a children's charity we hold real concerns that young people's entitlement to a Physical Education, and likelihood of getting 60 active minutes a day, will be limited as schools come under increasing pressure."

PE teachers noted factors like 'timetabling', 'prioritisation and competition with core / exam subjects', 'pressure to catch up after Covid' and 'the value placed on the subject by the Department for Education resulting in PE being a low priority for too many schools'.

A school in the northwest, which undertook the Youth Sport Trust's survey but wishes to remain anonymous, said it has been forced to make devastating decisions when it comes to pupils' access to PE over the next year. Its students are currently on PE and Design Technology (DT) half termly rotations with Year 7, 8 and 9 students getting only two hours per week of PE for half a term. It said that these students then stop PE completely and move to DT for half a term and repeat this through the year. The school said half of its Year 10's only get one hour per week with Year 11's receiving no PE whatsoever.

A school spokesperson said: "The issues this causes on students' physical, social and emotional health and wellbeing are profound, and the ability for teachers to build effective relationships with students is severely hampered. This is the curriculum we have had to create, which we know deep down is causing more problems than it solves but is due to the state of the education system in which we find ourselves. We feel we are being forced to do this, due to such pressures such as EBACC and Progress 8 driving so much of school agendas.

"We are desperate to get more PE in the curriculum, desperate to help our students and staff to access subjects which support their physical, social and emotional wellbeing, but we don't see how we can make this work in the current educational landscape. We are calling for real change alongside the Youth Sport Trust."

In the research, teachers said they wanted to see the Government being more vocal on the value of PE, better school investment in the subject and reducing the amount of PE time that is taken away for other subject interventions.

The research comes following the Government budget announcement on Thursday 17 November, within which the Chancellor stated that "being pro-education is being pro-growth." The Youth Sport Trust's full response to the announcement and its hopes for further funding commitments to school sports can be found here.

The Youth Sport Trust's Youth Board, formed of 12 young Changemakers, recently wrote an open letter to the Prime Minister Rishi Sunak to call for change.