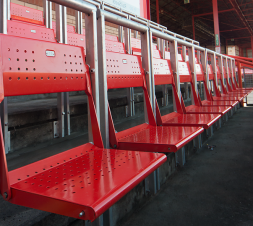 Outgoing Executive Chairman Richard Scudamore will receive a £5m farewell bonus paid by the Premier League Clubs it was learned this week. He will receive the payments 'in recognition of his outstanding work'

With the vast sums of money now swilling around the Premier League - due in no small part to the role of Scudamore over the years - the sum of money being asked of every club over 3 years might sound insignificant. But there has been a greater reaction by fans - and I will admit by ourselves at the Think Tank to this payment than many more of the 'snouts in the football trough' stories.

Sometimes there a series of events which can cause a tipping point. Fans have put up with the greed and ridiculous sums of money in the Premier League because the pot has kept growing and whilst Agents were taking out some £200m last year, the best players (or some of them) were still coming and the TV rights deals kept growing.

However, the debate around the collapse of the Wembley deal put a spotlight back onto the Premier League and its contribution (or lack of it) back into the game as a whole. The state of Grassroots football was highlighted in contrast to vast player wages. It's not a good look for the game.

The timing of this story therefore looks poor. The picture is of course complicated. The Premier League can and does its own thing. It's a highly successful business and talk to any of those running the game - it's a sport product that sells very well globally. So in its narrow definition of itself the Premier League is a highly successful business and Scudamore has led the revolution in revenues. In a normal business this sum of money mentioned - whilst beyond the lifetime earnings of most of us - will not be seen as totally excessive given the scale of the income he has brought to the table. It sounds a fantastic amount to most of us but int he world of football what is £5m between billionaire friends.

However, £5m will buy you 20 AGPs through the Football Foundation. When the next junior team has its game cancelled during the poor weather in January they will bemoan the lack of facilities and look at this vast sum as money taken 'out of football'. This is not a normal business and people are passionate about the 'national game' 'our clubs'. Football claims these things and special bonds when it wants to but then the Premier League then claims it's just a business when it suits them too.

The fans moan a lot about prices & the behaviour of clubs but whilst the extra money still rolls in they overlook all that is wrong with the game. Just look at the lack of response to the Man City story in the last week or two. Barely a genuine whimper from fans.

I know my friends at the Premier League will always point to the investment in good causes and its global popularity in defence and I take that up to a point. But the vulgarity of the money in the game and its lack of distribution has switched me off from the game I watched from the terraces at Leicester City in the 70s. I may not be totally alone as I don't see many people following me very often to switch off. The Football machine just ploughs on.

I Personally believe the tests for a successful Premier League are - long term financial sustainability even with a major change in revenue streams, a talent pathway that creates a winning England Team, an affordable product that generates great entertainment, a League that attracts the top talent and its top teams consistently winning European Championships. I will leave you to decide where the current League sits against those measures. I'd say it was falling in quite a few. But they don't care. Money is rolling in and they don't need to help the FA.

Fans will always moan when asked about the money in football but then shrug and carry on. As long as their team has the cash. There is some outrage but I don't think that many clubs or fans care enough to do any more. Meanwhile footballers, coaches, Refs grassroots administrators and junior players care. But their voice isn't enough to disturb the Board Rooms of the Premier League.

Sports news from Sports Management magazine: Report on longevity calls for £3bn government investment to ‘build back better health’ in the UK sportsmanagement.co.uk…