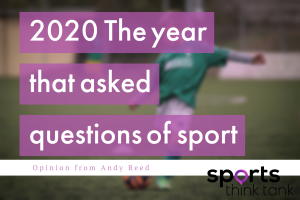 The impact of the Covid crisis on sport have already had enormous consequences for players, fans and those who lost their livelihoods. It is hard to believe just 9 months ago we were calling on sport to do its part and lockdown whilst the Cheltenham Festival went ahead.

The last year has highlighted what sport means to the nation and yet has exposed its weakness too.

Our friend Dan Roan sums up the year brilliantly in one of his longer pieces at the BBC Sport Website - 2020: When sport had to pause, but unleashed its power.

Hopefully this reflection will start a mini series of opinion pieces from our Advisory Group. There are many questions that 2020 has asked us as a sector.

Whilst there has been much to be proud of there have been times when we wondered if we got our tone and messaging right. We have felt uncomfortable with some of the claims about the role and impact of sport - even though we are at the forefront of those who know it has a massive policy contribution to make. Clearly politicians have felt the same as they have favoured other sectors. It is not about us v them, but something in 2020 felt wrong after the initial enthusiasm for being active was at the heart of the government messaging.

We worry that perhaps health claims being made about the contribution of the sector don't quite add up on closer scrutiny. We were already worried that physical activity - whilst a small part of the fight against obesity - has been overclaiming. We must start to recognise our part in the wider eco-system of an obesogenic environment.

The same is true of the wider claims about level of activity. What we have learned is that even the small gains we have made in participation levels were fragile and that we need to let go of claiming to 'owning' too much of the physical activity agenda. Much of our need to move will be met in our local environments (to be fair recognised by the Sport England Strategy now emerging) and so we are launching a partnership in the New Year to create space for deeper thought about Active Environments. As we will repeat often, the traditional sport and physical activity sector can only touch a fraction of the population we need moving. So let's collaborate and co create local solutions.

From rows in football about Furlough in the Premier League to the the EFL bail out package the finances of the highest profile sport have once again been exposed. Surely a return to normal cannot be allowed to happen. Yet somehow it feels like it.

The closure of gyms and leisure centres has exposed a massive debate particularly in the public sector provision about their purpose - something we will return to in a Roundtable in the the first week of January.

The divide between elite sport and community sport has been highlighted. Whist we have seen the return of games and sport behind closed doors in Covid secure bubbles (although turns out all too often not to be too secure) at the elite level, grass roots sports have been hardest hit. Unlike the professional sports and the belated £300m from the Government, the community part of the sector has been left out in the cold. The case is being made for #SaveOurSports but nothing seems imminent from DCMS

The levels of 'participation' have settled into a worrying pattern. The early wins when we saw people taking the opportunity to use their permitted once a day 'activity' have been lost. Levels are down and especially low amongst the disabled, BAME communities and women. Areas of social deprivation are unsurprisingly adversely affected. We know the Sport England Strategy being developed is moving in the same direction but we are calling for any future public investment into the sector to be targeted at those who need it most - not just subsidising the system for those who would participate anyway.

Inequalities have deepened. It has exposed the deep divide that exists in the UK. Sport has a role to play in dealing with some of these issues, but again let us not overclaim. We can play a small part in helping in some circumstances and in some communities where sport and physical activity can help unlock issues. But the real focus on tackling inequality, poverty and even destitution lies in other areas of policy across government.

Innovation has been strong and we want to continue that through 2021 as we launch our ideas factory... join in with fresh thinking across the next few months. We certainly need to expect things to look different for a few more years, not just the nest 4 months.

There are many more specific challenges ahead. These are just a few. We look forward to helping the sector face them through vigorous and healthy reflection, evidence gathering and creating a policy narrative about our role in the future. We must enter 2021 with a sense of humility and a willingness to play our part in a wider policy framework that puts wellbeing in all its forms at the heart of our case.