On the day that mark's 10 years since that famed evening in Singapore when London was announced as the host for the 2012 Olympics, we have released some of the key findings from the survey we undertook to capture the important opinions and thoughts from some the country's most senior leaders in sport.

This survey was based on round-table we hosted back in late 2014 to look at the keys issues in sport for the Election.

There were three primary objectives of this research:

With more than 95% of participants calling for 'fresh thinking and more independent input', we believe there are plenty of issues that require this new Government's attention. Tracey Crouch, the new Sports Minister, has made a good start by announcing that she will be reassessing DCMS's sports strategy and wider approach to participation. This will presents an opportunity to debate some of the issues raised in our survey.

The research engaged a wide range of stakeholders from the sector in January and February this year. We surveyed a group that included academics, journalists, sponsors, national governing body administrators, and community deliverers of sport, among others. While it's not a full sample survey, the research provides a good indication of what we had been hearing from the sector over the last year and in turn provides an illustrative base for sports policy making under this new Government. 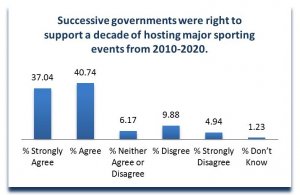 So what were the key findings?

Respondents acknowledged the sector lacked a powerful voice to be able to affect major political decisions. To achieve this, it was felt that the sector needed:

You can find a copy of all the released findings from the survey here.

Linked to this was a strong appetite for change around developing a 10 year strategy for sport that embraced fresh thinking, independent input and innovation. While the sector has much experience to offer and is critical to delivery, new approaches are needed especially those offered by new technology and entrepreneurs if we are going to maximise the potential of sport to improve sports participation and the nation's health, fitness and well-being.

With 70% indicating that the private sector could invest more in grassroots and community sport and 79% believing that our national governing bodies need to think more creatively about products, pricing, platforms and content any new strategy must explore how the sector and government can work together to achieve this. 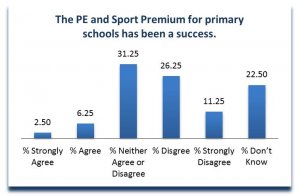 The former Olympics Minister Dame Tess Jowell MP has this week voiced her criticism of the current Government's commitment to creating a legacy for youth sport through school sport provision. While many believed the recent School Sport Premium was initiative was unsuccessful, many other respondents felt they could neither agreed or disagreed, and many others were not in a position to make a judgement. This suggests to us that policy makers should allow more time for the current strategy to fully bed-in, and also undertake more research into the impact of the policy before looking for alternatives. Interestingly, over 70% of respondents believed schools should record children's fitness levels' – one policy idea among many to help address childhood inactivity. 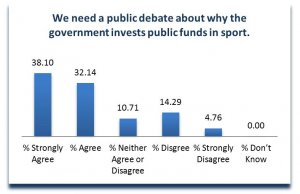 9/10 participants believed the focus on sports policy should be directed at the distinctive role that sport can play in wider policy outcomes, including improving community integration, boosting employability and reducing crime. Moreover, 85% said sport should link with 'innovators and entrepreneurs' to 'meet consumer needs'. These two insights need further consideration as the Government looks to develop its new sports strategy.

We will be releasing further insights from the research in the coming weeks, as we look to create a framework in which we can explore and debate new thinking from range of diverse stakeholders and bring in fresh thinking from other sectors to help the future of sports policy in this country. Sport offers our society and communities so much and the time has arrived for all of us to ensure we leave our own sporting legacy for the next generation.