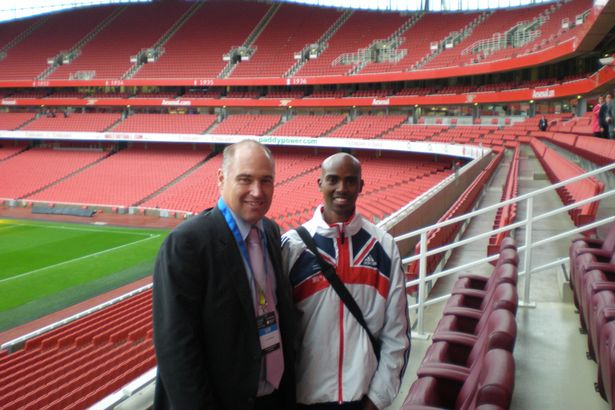 Today we publish an article by Alan Watkinson - a high profile supporter of School Sport Partnerships and well-known because this Summer one of his pupils - Mo Farrah went on to win 2 Gold medals for Team GB at the London Olympics! Alan this week won the Pride of Britain Teacher Award Writing in a personal capacity Alan sets out his views to the Sports Think Tank.

"It is true to say that I spent the summer of 2012 with a huge grin on my face intermingled with tears of joy rolling down my cheeks. Hearing myself using such phrases as "they just want me to do a piece to camera" and "that was Tessa (Jowell) on the phone" added to the surreal phenomena that was my 2012 Olympic experience.

The media's thirst for everything about my former pupil Mo Farah was insatiable. Questions such as "Explain when you first met Mo?" and "What he was like at school?" were incessant. The interest was flattering; how could I ever tire of talking about the former pupil that had wowed the world? Visits to 10 Downing Street and talks of a Knighthood were, to my mind, the least rewards that my modest, fun loving, world beating friend deserved. Surely, soon it will soon be my turn to call him "Sir".

The focus of the media was to move on relatively quickly after Mo's triumphs. "What did I think of the selling off of playing fields?" "Is the government right to focus on competitive sport as the solution to inspiring a generation and "Have you got confidence that Michael Gove and David Cameron will do the right thing for school sport?" The questions were no longer quite as comfortable but my passion, interest and strength of feeling on this subject is commensurate with my pride in my ex pupil's performance. There is much to comment on and I had the opportunity to strongly present a very popular view among Physical Education and Sport professionals. To use Mo's old secondary school motto – carpe diem - or, for non-Latin aficionados like the Secretary of State for Education, seize the day.

I remain very angry about Michael Gove's summary dismissal of the outstanding work of the network of School Sport Partnerships. His selective use of data and manipulation and misrepresentation of this data was offensive. You would think that somebody so fond of history would be more mindful of not trying to re-write it. An enormous success, a world leading system, confined to the dustbin in a fit of political pique.

However, the moment he made that decision we moved on and…

Throughout the joyful months of the Olympic and Paralympic Games there was an underlying powerful and challenging message being portrayed. It was an ever present at events, ceremonies, parades and celebrations. Every time I saw the message I was given hope. Gradually the backdrop of "Inspire a Generation" eased its way to the front in the same effortless way that Mo did on those two glorious Saturdays in August. The motto was launched on April 18th by Lord Sebastian Coe on a visit to Kew Gardens and it would prove to be the critical slogan that made the issue of legacy prominent and politically important. In short the motto was a stroke of genius that coupled with the spine tingling effect of the Games has motivated the nation to find the solution to this conundrum of how we achieve this Holy Grail.

For a start we need an integrated system from top to bottom. The answer is developing and strengthening a multi layered and multi-faceted network which relies on enlightened people, solid partnership and genuine multi-agency approaches. The benefits of Physical Education and Sport transcend a whole host of government departments and the whole sporting network. From the development of Physical Literacy for every individual in primary schools to the appropriate support for our most talented world leading performers, we should leave no stone unturned in providing a legacy for all that does the best ever Olympic Games complete justice.

In short we have three immediate and very pressing challenges. In the short window of time we have to make the most of the Olympic buzz, we need to commit to investment in people, we need to create structures that can make a real difference and we need a total shake up of our Primary Physical Education offer. Each topic is huge in isolation but I am sure that each and every one of these three issues resonates with those that understand the sporting industry in Britain.

Appointing Lord Coe as the government's legacy advisor was probably not one of David Cameron's more tricky decisions but it should be warmly welcomed nonetheless. Let's hope the man that led the bid and led the delivery of the most successful Olympic Games ever can pull off the most spectacular hat trick in this nation's history since Geoff Hurst's efforts in 1966. There are many inspirational and prominent sports strategists in this country and I would love to think that Sir Clive Woodward, Dave Brailsford and Baroness Sue Campbell, to name but a few, would be, or indeed have been, early staging posts for Lord Coe.

Last week I attended the Youth Sport Trust School Sport conference and am very excited by the new strategic approach proposed by the Trust. The organisation has taken an unwarranted hammering from our Secretary of State for Education. However, under the leadership of John Steele and Baroness Campbell they display indefatigable spirit and a total commitment to the cause; this is in itself a massive inspiration.

It was also very good to hear Maria Miller (Secretary of State for DCMS) speak. She appears to have a good grasp of the issues and revealed that a joint DCMS/DfE announcement will be made before Christmas 2012. Naturally, we wish you every success with that Maria. If you happen to be with Mr Gove and come across a sign post marked Damascus, get him on that road, grab your brightest torch and give it your very best shot. Even the most ardent rugby fans amongst us would list that as their favourite conversion of all time.

The situation is complex but requires immediate action and that in itself is very difficult. There will be many opinions and many suggestions as to what the most pressing issue is. To conclude I have listed three that I personally consider to be a top priority.

1) A long term cross party, cross department plan is needed. So number one priority is movers and shakers round a table with Lord Coe in charge – now where have we seen that before?

2) We need an immediate ring fencing and retention of the current level of funding to keep the life support switched on. The further diminishing of our already beleaguered system would be catastrophic. This is still an 80% cut on what went before and greater resource will be needed. However, doing this would allow time for us to grow and shape a true lasting legacy.

3) Finally, high quality primary school, Physical Education is the top priority. We need to accept that, despite pockets of outstanding practice, the problems are so deep rooted that there is no quick fix. We need investment in a solution that develops, educates and engages the practitioners, teachers and coaches alike. We also need rigorous Ofsted criteria that take the physical development of young people and all the well-researched, unarguable benefits more seriously. This may not be comfortable for some, and it may cost some money, but the cost of not doing it would be far greater. We need a plan now!"