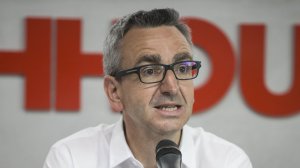 Tim Hollingsworth has been appointed Chief Executive of Sport England and will follow on from Jennie Price when she leaves us at the end of October after 11 years.

That followed an impressive 147-medal haul at Rio 2016 as his team finished second in the medal table, up from third and 120 medals at London 2012.

Tim has also been at the forefront of the work that has increased the profile and interest of the Paralympic movement, driving the commercial and business growth of the BPA as a charity that challenges perceptions of disability in society.