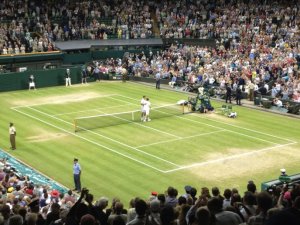 Emma Raducanu's incredible US Open success could lead to a huge government investment in grassroots tennis.

The Lawn Tennis Association is hoping that Emma Raducanu's incredible US Open victory will lead to a huge £20million government investment in grassroots tennis, Express Sport has been told. Interest in the sport has skyrocketed since the inexperienced 18-year-old stunned the tennis world by winning at Flushing Meadows.

Raducanu did not drop a single set in New York despite starting the tournament as a qualifier. Her sensational 6-4, 6-3 win in her showdown clash with Canada's Leylah Fernandez was her 10th match over a gruelling three-week period.

The Bromley-based star became the first British woman to win a Grand Slam since Virginia Wade lifted the Wimbledon title in 1977.

Raducanu's success has prompted a boom in tennis clubs receiving membership requests. However, Express Sport has been told that a huge 40 per cent of tennis courts on park sites are either unplayable or will be unplayable without significant investment.