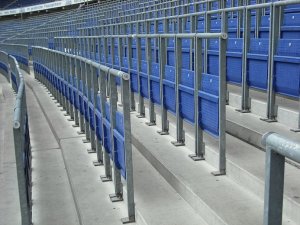 Five football clubs will take part in a safe standing trial from 1 January 2022, the sports minister Nigel Huddleston has confirmed.

Manchester United, Manchester City, Tottenham, Chelsea in the Premier League, and Cardiff City in the Championship, are the clubs whose applications to operate licensed safe standing areas have been approved.

Tottenham chairman Daniel Levy said the club were delighted after having been approved as an early adopter of the standing areas.

"We are extremely proud of our 'safe seating' design, which ensures both comfort and safety, whether standing or seated, while maintaining the same aesthetics as in all other areas of the stadium," said Levy.

Standing in English football's top two divisions was outlawed following recommendations made in the Taylor Report into the 1989 Hillsborough disaster, where 97 Liverpool fans lost their lives.

Although in recent seasons, organisations such as the Football Supporters' Association (FSA) have called for standing to be reintroduced. Barrier or rail seating has been developed to provide seats that can be converted to standing areas when desired.

RT @Sport_England: Are you passionate about improving accessibility to sport and physical activity on a local level? We are looking for a new Head of Campaigns. Find out more ⬇️

RT @SkySportsNews: 🗣️ "It's a myth girls don't like sport."

Women in Sport CEO, Stephanie Hilborne says girls are facing a lack of opportunities and pressures of societal expectations which are preventing them from taking part in sport.