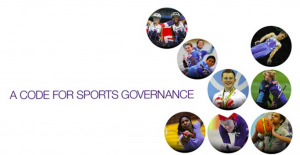 The long-awaited Code for Sports Governance was Launched at the BMA headquarters in London yesterday. In a show of unity, the CEOs of UK Sport and Sport England Jennie price and Liz Nichols presided over a double act presentation. Unity of the code has been a strong request from the sector who often report separately to both bodies, so this was a welcome step.

For a number of years Governance in sport has concerned ministers who felt hapless over nightmare paper headlines - despite substantial levels of public money being invested. I recall Football Regulation being discussed at DCMS in my time in the late 90s Recent scandals and the gift of FIFA in the headlines has helped speed up the process in recent years. Bullying stories in 2016 have kept up pressure on NGBs to get better.

There were no great surprises in the code for those who have been following the launch in May and the consultation. However, there was one issue that raised an eyebrow - that of taking the compliance down to Council level over length limits for terms of office. It didn't get a big fanfare but this does signal that DCMS, SE and UK Sport are ready for a battle beyond the Board room requirements.

In all my dealings with sports governance over recent years I believe generally at Board level they have started to understand the SRA voluntary code and increasingly the requirements from SE and UK Sport. But the tier 'below' at Council level is where much of the battles will come. Often referred to as the 'blazers' in sport (with some element of truth) this is where the old-style governance will run into some trouble. The high-profile bodies like the FA and RFU Councils come to mind immediately but this will impact throughout sports bodies.

The call for 30% women on Boards was widely signalled and there was the strongest hint that whilst mandatory diversity levels for BAME and disability were not set there would need to be the strongest evidence NGBs were acting in these areas too. As we are working with Sporting Equals, Women in Sport and EFDS on this issue we hope to make announcements soon that should help NGBs take positive action.

I also liked the way proportionality has been handled with the 3 Tiers of requirements. It was always a worry that smaller organisations funded at low levels would be unable to cope with the additional compliance requirements through capacity issues alone. The new approach talks a good game on proportionality and we should watch this closely.

The day was preluded by the spin in the media on what this meant for Football. This has always been the litmus test and there must be a genuine appetite inside DCMS to take on the FA. In my experience, there has often been strong talk but it hasn't been followed through. Sources close to DCMS assure me everybody is aligned and ready for that battle. I do think in the new leadership at the FA there is a willingness too - but as always can a way be found to make is palatable for the Turkeys to vote for Christmas.?

Finally, I do hope that the cultural shift in governance improvement and the need for agility and flexibility is not lost in a compliance culture. For me it is more important that NGBs and sports bodies are changing their governance to meet the code because it is the right thing to do, not to tick boxes. There should be nothing in this code that a modern forward looking sport body could disagree with and so even if it can't tick every box it should be on this journey all the time and live and breathe its values.