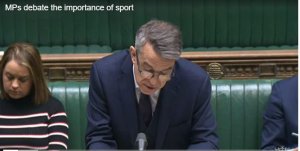 A debate took place in the House of Commons on the 10th January 2023 on Sport in School and Community. In light of the PAC report into the 2012 Olympic Legacy and the government announcing its extension to the Energy Business Support scheme - leaving swimming pools in the lurch - it was a timely debate.

I beg to move,

That this House has considered sport in schools and communities.

I am really pleased to open this general debate on this important topic. We will all agree that sport has a vital role to play in all of our lives, through its power to be a force for good that brings communities together and as an important tool in improving the health of the nation. The topic of today's debate brings together multiple areas of work from multiple Departments and arm's length bodies, which is why I am so pleased to be joined by my right hon. Friend the Minister for Schools, who will be closing this debate. The work of both of our Departments, as well as many others, contributes to the overall Government mission to support everyone, especially children and young people, to be able to enjoy sport and be more active. As a Government, we are fully committed to supporting sport in schools and communities.